The close of another sunny day in Darwin.

Our time here is coming to and end. We thought about staying longer—there’s a uni where I could get work, Lee has work, and R is loving pre-school. We have a friends here and I’ve even joined a local soccer team. 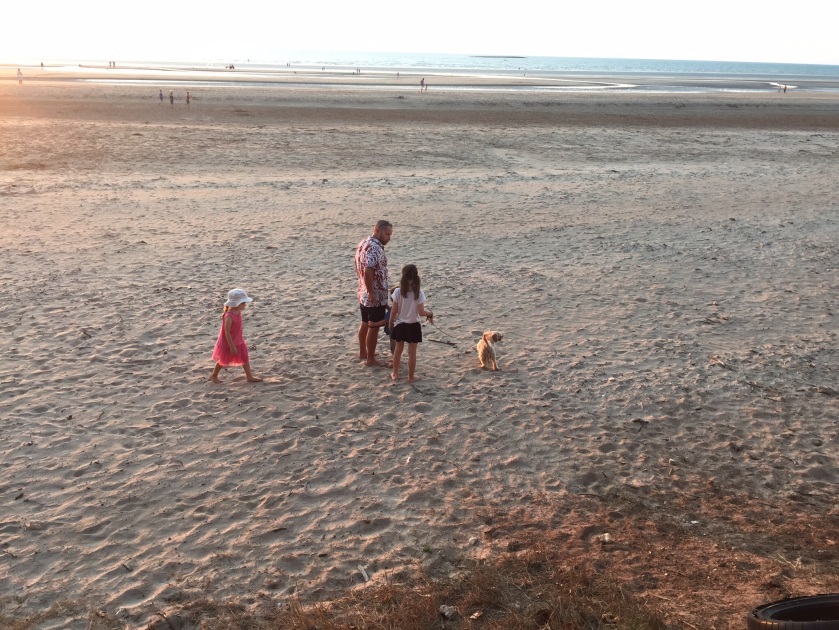 K and R hanging out with Ben, Moe and Pao Pao on a Friday evening at Casaurina Beach

Ultimately, we can’t stay because there are few resources for deaf kids in the NT.

There’s no deaf school in Darwin, and the only deaf unit in a mainstream school was closed over a decade ago.

The Darwin Festival was on while we were here, the biggest event of the year with an amazing line up of plays and performances. Not one event during the entire three weeks was interpreted.

In July, I took R to a story time at the library that was advertised as interpreted, but when we arrived, they said, “Oh, no.  We haven’t had an interpreter here all year, but we do advertise it.”

There are three interpreters for the entire city, one full-time, one part-time and one on maternity leave. One interpreter told me that deaf kids are lucky to get an hour and a half of interpreting each week at their school. Many deaf people here in Darwin have gone “down south” for school.

I met one successful young deaf woman who attended Darwin High School—and did well there—but her parents had to put up a fight just to get her a note-taker. She didn’t have an interpreter.

For the start of Disabilities’ Awareness Week in Darwin, they had a free screening of The Penguins of Madagascar. I rang ahead of time to make sure it was captioned.  They assured me it was, so, I told K, who was very excited. We rucked up early to get a good seat, the movie started and K’s face fell. “No captions,” she said.

And it was the opening event for Disabilities’ Awareness Week?!

On a positive note, when getting new moulds for K at Australian Hearing, we met an audiologist who’s studying Auslan at Deaf NT.

Deaf NT has been welcoming. They have a small office and a big workload.

K has been attending the local mainstream school. She wanted to give it a try. In the first week, she got assessed and the Department of Education concluded that she would receive no support—zero—because she’s not behind.

If we were staying in Darwin, I’d tell them she’s not behind because she’s had a full-time interpreter, three hours a week of an amazing itinerant teacher, and one day a week at a deaf school in Sydney.

The school, Stuart Park Primary, is a lovely place—truly multicultural, friendly and positive. At assemblies they give awards to students who’ve helped clean up the playground. K’s teacher is talented and well-loved. She’s good at using visual cues in the classroom.

The girls head off to school and preschool.

Unfortunately, there’s little deaf awareness at Stuart Park, and being the only deaf kid in school has proved challenging.

A number of teachers don’t look at K when they’re talking and don’t put the captions on for videos. For the school concert, K was given the role of a band member and told to lip-sync three songs that she couldn’t hear. At lunch time, she can’t hear the other kids and no one signs.

I offered to take K out of school, but she didn’t want to go.  She’s not one to run away—she’s stayed for our full six weeks, and she’s managed to make friends. But during lunchtime, she chooses to read in the library because she can’t hear her friends on the playground.

Despite the fact that K has not had equal access at her school, she’s had some positive experiences and we’re grateful for the effort the school has made.

K ready for her first school disco, with a 60s theme.

On Tuesdays, K and I taught Auslan to her class. I interpreted the assemblies every Friday.

Our experience here overall makes me realize how the big cities are really the place to be if you’re deaf.  And yet there is a small community of deaf people making their way here in Darwin and we’ve been able to meet some of them. They like Darwin for the same reasons everyone else does—it’s relaxed, easy and warm in more ways than one.

Cooling off in Buley Rock Holes in nearby Litchfield National Park, a popular place with locals.

One thought on “Deaf in Darwin”