The history of interstate deaf sport in Australia dates back to 1895 when the Victorian deaf cricket team travelled to South Australia for a game.  Deaf Sport Carnivals have been held from 1914.

“Whilst sport is clearly core, the Australian Deaf Games also constitutes a major social and cultural festival for the whole Deaf community.”  —Australiandeafgames.com

We arrived to a sea of hands on 9 January for the opening ceremonies in Adelaide.  Teams from every state and territory, Fiji and Vanuatu were involved and hundreds of spectators from around Australia welcomed them.

Highlights of the week included:

–Watching the Fijian team enter the stage of the opening ceremonies with smiles and traditional dress. Fiji has a very strong deaf community.

–Meeting people from all over Australia–such a friendly atmosphere.  I’ve always found the Deaf community warm and welcoming, even when I only knew about three words of Auslan.

Consider getting off Highway One and taking the inland route, where you can visit the magical Little Desert National Park.

On the fifth of January, after a long hot drive from the other side of Melbourne, we arrived at our campsite hungry, tired and hot.  At 6.30 in the evening, it was still 31 degrees C.  I had a headache, the girls were fighting, but we pressed on—we had to—and set up the camper.

The drinking water was warm and the flies swarmed and there were more ants than I’ve ever seen in my life, including bull ants—no thongs here!

Then it was past 7 and I knew I should cook dinner, but instead I said, “I’m going to put my toes in the river.”  K followed.

The river, just 20 meters from our campsite, was green and wide with a slight ripple.  We put our feet in, looked at each other, took off our clothes and jumped in the water.

The effect of being submerged was instant—we laughed and splashed, feeling cool and free and fully refreshed.

That night it was quiet and light until nearly 10.  Even at 10.30, the stars weren’t completely out.  At 11, when the girls were finally asleep, Lee and I started to see shooting stars.  There were only two other campers in this large campsite, Horseshoe Bend, named for the bend in the river.  And although there was a live redback in the women’s toilet, there were no mosquitos.

The next morning, when I was tidying up the camp kitchen, I turned around and found myself face-to-face with a large emu.  It gave me a shock.  Close behind was an emu chick, who was still larger than my four-year-old.

We stayed three nights.  One morning K and I biked into town past a large olive orchard.  When we saw a rope swing hanging over the river, K stared longingly at it.  “I wish I lived here,” she said in Auslan, “then I could go on that every day.”  And she made the sign for swinging on a rope, letting go and splashing into the river that described the action in a perfect visual manner.  It’s something I would never have thought up myself, despite the fact that I’ve been signing for five years and have a Diploma in Auslan.

This happens all the time when I’m signing with deaf people.  I try to describe something, fail, and then they give me the visual language for it—paint a picture in the air so succinct, so apt.  I wish my brain worked like that.  For me, Auslan will always be a second language.  K’s chosen not to wear her hearing aids lately—excited by the prospect of going to Deaf Games in a few days, where she’ll communicate with everyone in Auslan.

Nowa Nowa is a lazy town in Victoria on Highway One with a river, a caravan park, a pub across the road and a population of 144.

We came for two nights and stayed four when we met a friendly extended family from Gippsland. They hosted us for New Year’s on camping chairs outside their caravan. We chatted into the wee hours about campsites and blogs and dogs, while the kids slept and we listened to free live music from the pub across the road: a perfect way to ring in the New Year.

Next stop, Melbourne (for trailer repairs). Then we’ll make our way to Deaf Games in Adelaide, via a National Park somewhere . . .

Shipwreck Creek is located down a bumpy  dirt road 12 kilometres from Mallacoota. Set in the bush, there are just five sites, all a short walk to a secluded beach. 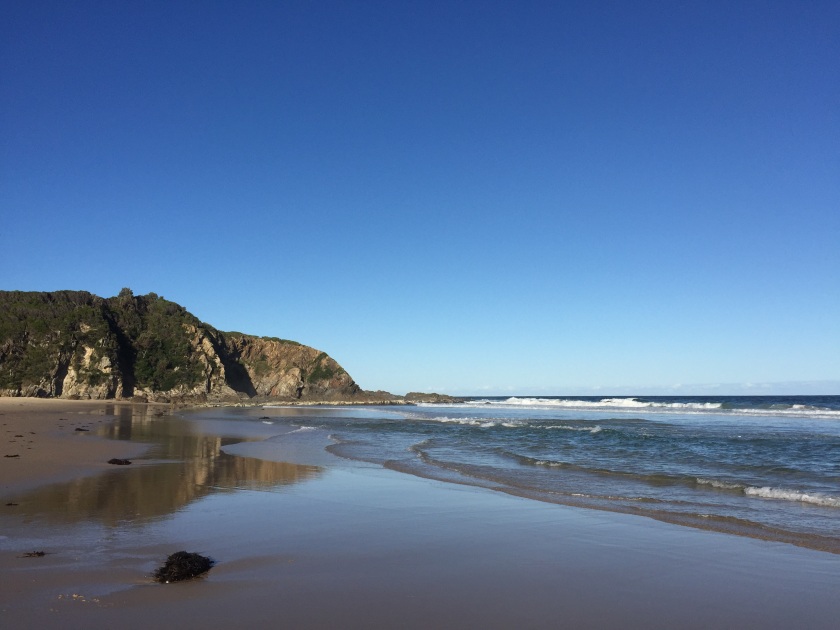 Croajingolong National Park, in southeastern Victoria, is home to 243 species of bird and 90 varieties of wild orchid. 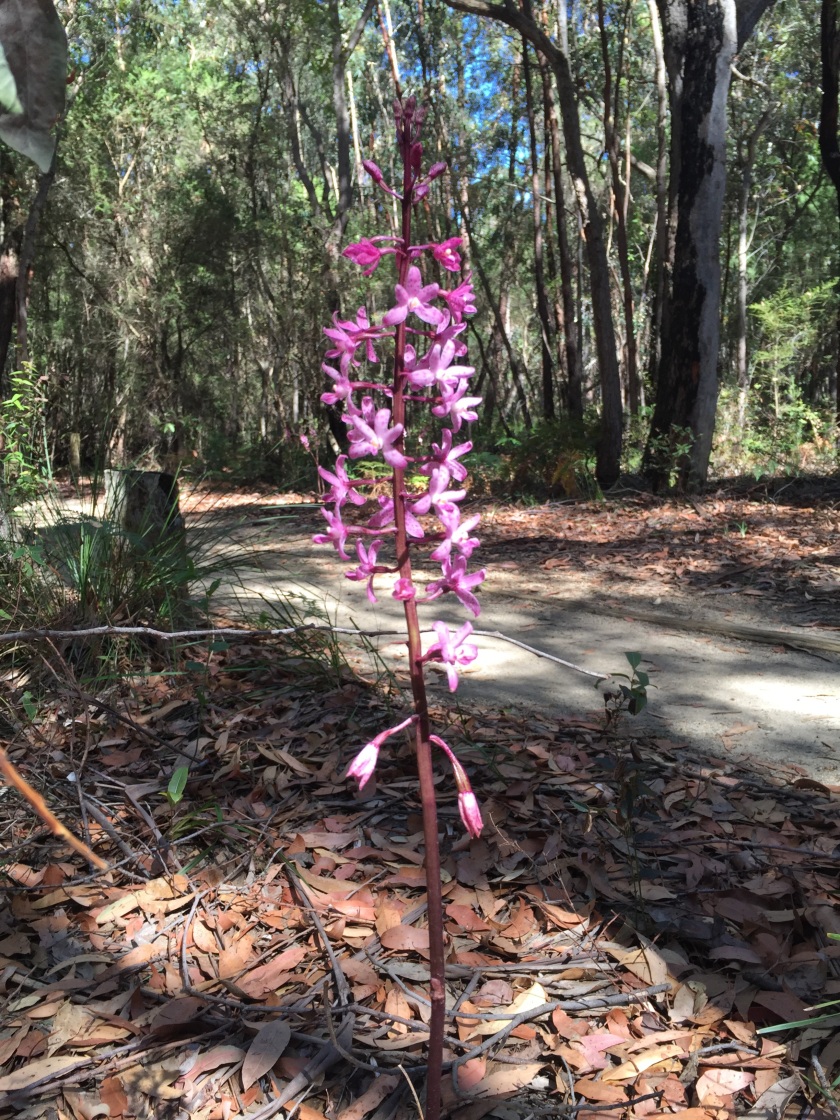 We were there just two nights, but could’ve stayed two weeks. . .

Bournda National Park is a little-known place of great natural beauty on the far South Coast of New South Wales. The park is filled with lagoons, beaches and miles and miles of native bush.  We camped here over Christmas and saw a red-bellied black snake slither across the dirt road next to our site.  We saw lumbering goannas, kangaroos, wallabies, the ever-present possum and a wolf spider the size of a small bird in the women’s toilet.

On our first night, we met a family on the site next to us from a town just sixty kilometres up the road.  I was amazed at how free and easy the parents were, even with four kids, including a baby.  It all felt a very long way from the Eastern Suburbs of Sydney.

When their kids were getting ready for shower time, the five-year-old wore her towel like a giant cape that dragged along the dirt of the campsite.  Her mother didn’t seem to take note.  I looked at the girl in the dirt and fought an urge to yank the towel off the ground and keep it just a little bit clean for after her shower.

Later, I said to Lee, “I want to be that relaxed.”

Later still we all sat round their campfire with guitars and a uke.  As it grew dark, I interpreted the conversation for my daughter, K, who’s deaf.  The boy in the family, who looked to be about ten or twelve, watched me sign.  And after a while he said, “Sign language is so cool!”

Sadly, they were leaving the next day, going back to Christmas with the mum’s five siblings and their partners and kids. “I love big families,” she said to me, baby at her breast, and she told me how her grandfather was the 21st of 22.

They live in a town, a village, really, on the same stunning coastline as Bournda.  I always thought that small town life would be cloistered, dull and gossipy and maybe it is, but this family appeared so much happier than any family I know back in Sydney.

Last week, on the 20th of December, we were meant to leave Sydney at nine a.m.  We’d been planning to take this trip for eleven years; we’d been packing up for the last six days.

After loading up the camper trailer, throwing out stuff we didn’t need, putting every last item into storage and cleaning up for the tenants, we pulled out of the drive at twelve minutes past five in the evening.

Obviously, we didn’t make it to where I’d booked our first camp site, four hours down the coast.  We pulled into a caravan park in Bulli, just north of Wollongong.

The girls, who’d been waiting all day while we cleaned, were desperate to get out.  Lee set up the camper trailer, while I took them down to the beach.  We kicked off our shoes and ran–I think all three of us felt the same sense of absolute freedom.  We ran and ran, in and out of waves.  The girls got their clothes wet.  I didn’t tell them off.

I wish I could capture that feeling, bottle it and bring it out from time to time when all of life’s constraints and miseries—meetings with difficult people, a stack of papers to mark, the crying child I can’t console—begin to overwhelm the soul.

we woke up to sunshine on our third day

and couldn’t resist heading to the beach (Pebbly Beach) in our PJs.

Highway One circumnavigates Australia and, at approximately 14,500 kilometres, it’s one of the longest roads in the world.

On 20 December 2015 I’ll embark on a journey around Australia with two girls and a willing Welshman.

We’ll leave our unit in Bronte and head out in a camper trailer packed with bikes, scooters, surfboards, a unicycle, a Dutch oven, books and a few clothes, tools (for my carpenter husband to pick up work), a fair amount of trepidation and an imminent sense of freedom.  Stay tuned . . .

This is a blog about our family (one deaf and three hearing) travelling around Australia for a year with a four wheel-drive camper trailer. We hope to go to some remote areas on this vast continent. We'll also visit deaf schools and deaf communities along the way, including Deaf Games 2016 in Adelaide.
Loading Comments...